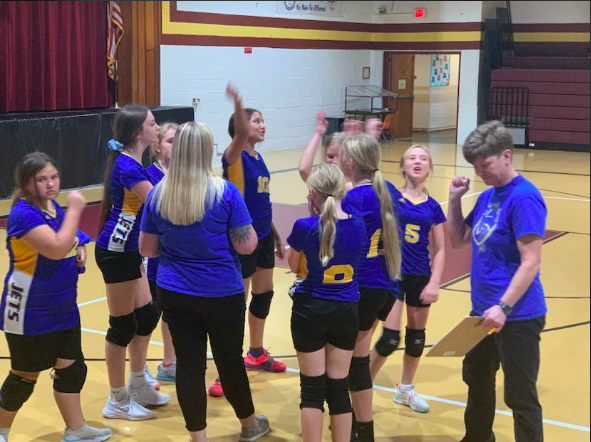 AMMS Volleyball Picks Up a Win

ST. PAUL – Despite a week off from game competition, including several days
without even having practice, the Altoona-Midway Middle School volleyball team was
still able to place another match in the win column during action Monday afternoon at the
St. Paul quadrangular.
The Lady Jets went 1-2 on the afternoon, picking up a victory in their final match of
the evening, 25-20, 25-15 over St. Patrick’s of Parsons.
That win came after a pair of setbacks for the AMMS squad, as they fell 16-25, 4-25
to host St. Paul, and 10-25, 9-25 to Thayer earlier in the day.
“We definitely struggled for a while getting back into the groove,” said AMMS head
coach Nikki Almond. “With our home triangular being canceled on Thursday of last week,
and then having a long weekend (from school), we hadn’t practiced in four days.
“It took us a while to knock the rust off, but I was very proud of the girls the way
they bounced back and won their final match.”
The Lady Jets, now 2-7 overall on the season, return to the courts Monday, Oct. 3,
with a triangular event at Edna. First serve is slated for 5 p.m.
AMMS vs. St. Paul
St. Paul took the first set 25-16 and then the wheels came off as the Lady Jets
dropped the second set 4-25.
“We kept up with St. Paul pretty well at the start of the first game, but we started to
fall flat toward the end,” Almond noted. “Then at the beginning of the second set, two of
our girls collided and Hadlee (Pupanek) ended up with a bloody nose and had to come out.
“Not having a setter on the court really hurt us at that point,” Almond added.
Sandra Morales led the Lady Jet attack with seven aces, while Bella Davis and
Pupanek each had a tip.
AMMS vs. Thayer
Thayer won this match 25-10, 25-9.

“Not having played in so long really showed up in this match,” Almond noted. “We
will be working on keeping our feet planted when we pass and waiting on the ball to come
to us.
“Still, I was proud of the way the girls kept encouraging each other after mistakes,”
she added. “Emily (Burch, a sixth grader) filled in for Hadlee and did a great job with the
help of her teammates. “The seventh graders have been great leaders helping the sixth
graders figure out their positions on the court.”
Almond pointed out the AMMS squad has no eighth graders and consists of three
seventh graders and five sixth graders.
“Considering all that, they are doing really well,” Almond said.
Pupanek had three tips and Morales had another two aces in this match.
AMMS vs. St. Pats
The Lady Jets finished off the day in style, defeating St. Patrick’s 25-20, 25-15.
“The girls showed up and worked hard for this win. They fought for every point and
showed how scrappy they can be. I couldn’t be more proud,” Almond said.
Morales fired another six aces and collected two digs and a kill to pace the Lady
Jets. Pupanek finished with two aces and three tips, while Bella Douglas added an ace,
Davis recorded a kill, and Khiana Hicks garnered a dig.
“This was a great team effort,” Almond noted. “Khiana and Bella Douglas did great
jobs of following the ball and being ready for it to come back over to them. Sandra did
amazing covering the court. Hadlee had great reaction time at the net. Bella Davis added
nine good serves and Destiny (Raymond) added five.
“The girls played so much better in this match, and we were reminded how good it
feels to win,” Almond added.