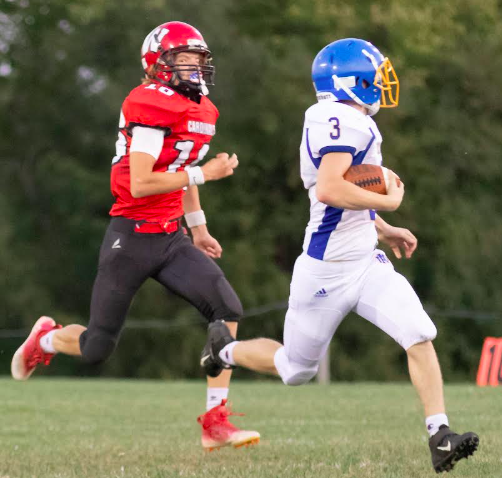 WETMORE – Not only do the Wetmore Cardinals have seven seniors dotting their
13-man roster, but they have speed and strength as well. The Altoona-Midway High
School Jets found that combination too much to handle as the Cardinals rolled to a 54-6
victory here Friday night.
The 6-Man, District 1 contest was called midway into the third period due to the
mercy rule.
“Not only does Westmore have a very fine team, but we had to make the long trip
up there,” noted AMHS head coach Randy Almond. “Needless to say, it was pretty easy to
see that we got off to a very slow start and just couldn’t recover.”
Wetmore jumped out to a 20-0 lead in the first period, increased that margin to 48-6
at halftime, and added another touchdown in the third period to finish the contest.
“We’re going to work hard in practice and bounce back,” Almond said. “We’ll work
on blocking, tackling and other fundamentals and be ready to face Peabody next Friday for
Homecoming.”
Altoona-Midway senior Harley Lopeman returned a kickoff 65 yards for a
touchdown in the second period for the Jets’ only score of the game. The AMHS offense
was limited to just 64 yards passing and 21 yards rushing.
“Wetmore was quick and physical on defense and we struggled to hold our blocks,”
Almond noted. “We couldn’t get much of a ground game going, and while we did have
some success passing, we struggled to give our quarterback much time to throw.”
Brandon Johnson completed 8-of-13 passes on the night, good for 53 yards, while
Jacob Meigs added one completion for 11 yards.
Kieran Foster was the leading rusher for the Jets, picking up 19 yards on three
attempts. The receiving yardage was evenly divided, as Chase Nalley had three receptions
for 19 yards; Meigs had two catches for 13 yards; and collecting one catch apiece were
Foster for 13 yards, Johnson for 11, and Lane Poeverlein and William Stackhouse for 4
yards apiece.
Despite Wetmore’s strong offensive showing, the Jets did turn in some highlights on
defense. Blaine Collins was credited with nine total tackles, including six unassisted, while
Stackhouse finished with six tackles and also picked off a Cardinal pass for an
interception.
Johnson finished with eight tackles, Meigs recorded six, Lopeman and Foster
garnered five each, Nalley had four, Poeverlein three, Andy Tiger two and Kage Beck one.
“Defensively, Wetmore’s quickness really hurt us,” Almond said. “We need to work
on our outside contain and taking good angles in the open field.”

Wetmore improved to 4-1 with the victory. The Warriors stand 3-0 in 6-M, D1 play.
Altoona-Midway, now 2-3 overall and 1-3 in district, will try to rebound Friday,
Oct. 7, when the Jets host the Peabody-Burns Warriors. The Warriors (3-2, 2-1) lost to
Wetmore 46-6 three weeks ago, but are coming off a 46-0 victory over Southern Coffey
County. It will be Homecoming night at AMMS.