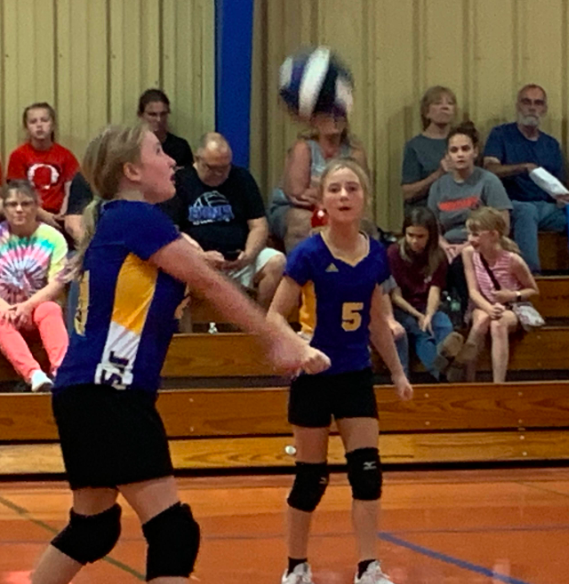 EDNA – Even without their fearless leader on the sideline, the Altoona-Midway Middle School volleyball team earned a split in a pair of matches played Monday at the Edna Triangular.

AMMS head coach Nikki Almond was out of town Monday, so assistant coach Charly Weilert took over the reins for the evening.

“The girls played outstanding, but first and foremost, we missed Nikki,” Weilert noted. “Nikki is the team leader and she has a way of calming the girls down or pumping them up, whatever needs to be done. I don’t have the knack for that that Nikki has.

“So, even though I stepped up in Nikki’s spot tonight, I certainly didn’t replace her.”

The Lady Jets, now 3-8 overall on the season despite having no eighth graders on the roster, were slated to host their final home matches of the season Thursday, Oct. 6, with a quadrangular at Milo Peterson Gymnasium. First serve is slated for 4 p.m.

In a thrilling two-set contest, Altoona-Midway came away with 25-23 victories in both games.

“The girls communicated very well and their serves were really good, and that is essential in close games,” Weilert said.

Destiny Raymond was perfect in 13 serves, including one ace, while Sandra Morales hit on 8-of-11 serves and fired five aces.

Khiana Hicks was 8-of-9 on serves, Bella Davis had 6-of-6, including an ace. Davis also added a kill.

Bella Douglas and Hadlee Pupanek were both 2-of-3 serving, while Pupanek also recorded an ace and four tips.

“Oswego was good at the net and were able to score with several dinks and tips,” Weilert pointed out. “Our girls played hard against Edna and just didn’t have enough spring in their step to cover the floor against Oswego. Our serves also suffered compared to their first game.”

Hicks led the Lady Jets with 10-of-11 in serving, including one ace. Raymond fired a perfect six serves, with one ace, and also added a dig. Morales had four good serves, including two aces, while Pupanek recorded another tip at the net.