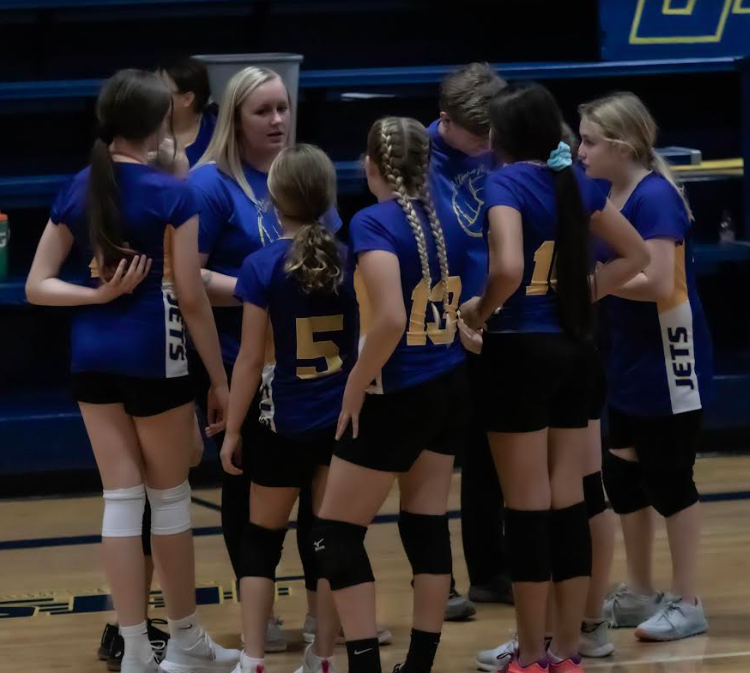 BUFFALO – Get out the brooms … it’s a sweep!
The young Altoona-Midway Middle School volleyball team, which had shown
steady improvement since the season began, took a meteoric stride in success here
Thursday afternoon, sweeping all three opponents in the AMMS quadrangular held at Milo
Peterson Gymnasium.
“The girls came out excited for tonight’s games, and we couldn’t be happier than to
win all three matches in front of our own fans,” said an elated Nikki Almond, head coach
of AMMS.
The Lady Jets, making their final appearance of the 2022 season before their own
crowd, closed out their home slate in style as they defeated Tyro Christian School 25-17,
25-15; Liberty Home Alliance 25-15, 25-13; and in a thrilling three-set finale, squeezed
past Chanute Christian Academy 25-21, 19-25, 15-13.
Altoona-Midway now stands at 6-8 overall on the season, and have won five of their
last six matches
“I am so proud of how far the team has come and how hard they have worked,”
Almond said. “I am lucky to have such a great group of girls. They are coachable, and it
makes all the difference.”
The Lady Jets will travel to Meadow View Middle School on Monday, Oct. 10, for a
triangular meet, before winding up the season with the Mineral Belt League Tournament,
scheduled for Oct. 15.
AMMS vs. Tyro Christian
In the opener, the Lady Jets won 25-17, 25-15, avenging a loss earlier in the season
to Tyro Christian.
“It was nice to come back and show Tyro how much we have improved,” Almond
said “Their coach mentioned after the match that our girls look totally different than they
did last time they played us. As a coach, it is always nice to hear those things.”

Bella Douglas and Sandra Morales each had four aces in the match, while Destiny
Raymond, Khiana Hicks and Bella Davis had one apiece. Morales and Hicks each
recorded a kill and Hadlee Pupanek collected four tips.
AMMS vs. Liberty
Next the Lady Jets took the measure of Liberty Home Alliance 25-15, 25-13.
“We sat for three matches before we got to play again, and that made me nervous.
But the girls came out ready to play once again,” Almond noted. “They’re communicating
better and learning to listen to each other as well. We have worked a lot on making smarter
decisions on the court and I could definitely tell a difference tonight!
Pupanek laced five aces for AMMS, while Morales added two and Hicks one.
Morales also notched three kills and Pupanek also had two tips. Meanwhile Davis
contributed 11 good serves out of 12 attempts.
AMMS vs. CCA
In a dramatic finale that went three sets, Altoona-Midway eeked out a 25-21, 19-25,
15-13 win over Chanute Christian Academy.
“After winning the first two matches, the girls really wanted to win the last one to
make it a clean sweep,” Almond said. “But CCA looked good on the court tonight. They
had pretty good control over their passing and I knew this would be the toughest match of
the night.
“To say this match was exciting is an understatement,” Almond added. “The girls
fought hard physically and mentally. They were worn out by the time this match rolled
around but they wanted this win so bad they could taste it.”
Pupanek led the Lady Jets with five tips, two kills and four aces. Morales fired
another five aces in the winning cause, and Raymond, Hicks, Davis and Douglas each
laced one ace.