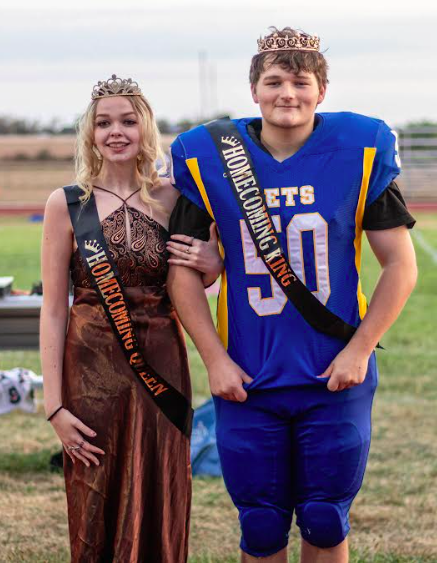 BUFFALO – Many supporters of the Altoona-Midway High School football team
were hoping for three things Friday night at Frank Kennedy Field – a great Homecoming
celebration, seeing a full four quarters of football for the first time this season, and the
third Jet victory of the year.
The first two goals were accomplished, but unfortunately, Peabody-Burns High
School spoiled the trifecta as the Warriors defeated the Jets 45-19 in the 6-man, District 1
contest.
Miss Alaura Maple was crowned as the 2022 Altoona-Midway Homecoming
Queen, and Jet team member Chase Nalley joined her as the Homecoming King. Both
students are seniors at AMHS.
As for the football game, Altoona-Midway struck first, but the Jets were unable to
hold the lead as the Warriors bounced back and claimed a 45-19 victory.
AMHS senior Brandon Johnson got the home crowd excited by reaching pay dirt
first via a 17-yard run. The PAT failed and the Jets led 6-0.
However, Peabody rallied to lead 20-6 by the end of the first quarter and 33-12 at
halftime. The Warriors led 39-12 after three periods, and each team managed a single
touchdown in the final quarter.
It was the first time this season that either the Jets or their opponents did not claim
victory early due to the mercy rule.
“Tonight was a disappointing loss, but I know the boys will put this game behind
them and have a good week of practice in preparation to take on Southern Coffey County
next Friday,” said AMHS head coach Randy Almond.
In addition to Johnson’s early TD run, the Jets found the end zone two more times
during the contest. Harley Lopeman accounted for both touchdowns, a second-quarter
kickoff return and a long run from scrimmage in the fourth quarter.
Jacob Meigs closed out the scoring by running in a PAT following the final score.
For the game, Lopeman rushed for 118 yards for the Jets. Kieran Foster carried five
times for 47 yards, while Johnson and Meigs finished with 22 and 21 yards, respectively.
Blaine Collins rang up 19 yards rushing and Nalley added four as the Jets finished with an
impressive 251 yards on the ground.
AMHS also notched 101 yards through the air. Meigs was 3-of-6 for 65 yards and
Johnson connected on 4-of-7 for 34 yards. Johnson was the leading receiver with 55 yards,
while Lopeman collected 24 yards and Nalley 20.
Defensively, Collins had a team-high 16 tackles, including eight unassisted. Collins
also had the Jets’ only sack on the night.

William Stackhouse came up with two interceptions to go with six total tackles,
while Meigs registered seven tackles and had a fumble recovery.
Lopeman and Johnson finished with five tackles each, Foster had four, Nalley three,
and Lane Poeverlein and Andy Tiger added two apiece.
Peabody-Burns moved to 3-1 in district play and 4-2 overall, while Altoona-Midway
fell to 1-4 in district and 2-4 overall.
The Jets will travel to Leroy to face Southern Coffey County on Friday, Oct. 14.
SCC is still seeking its first win on the year, as they stand 0-4 in district and 0-5 overall.
The Titans are coming off a 57-6 loss to Cunningham.