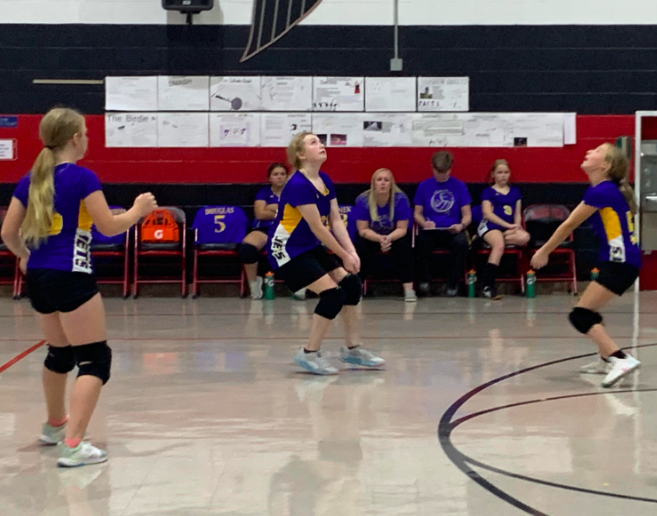 PARSONS – The Altoona-Midway Middle School volleyball team had its wins streak snapped in their opening match of a triangular held here Monday afternoon at Meadow View Middle School, but the Lady Jets bounced back in the nightcap to get back on the winning side of the ledger.

Despite the setback in the opener, Altoona-Midway has now claimed victory in six of their last eight matches. AMMS is 7-9 overall on the season.

The Lady Jets are scheduled to wrap up their 2022 fall season with the Mineral Belt League Tournament, scheduled for Oct. 15.

Meadow View, still undefeated on the season, pulled ahead midway in the opening set and never looked back, winning 25-10, 25-10.

“The girls played well in the beginning and stayed even in the first set until it was 8‑8,” said AMMS head coach Nikki Almond. “But then we fell behind and just couldn’t get caught back up. Meadow View is an excellent team and showed good control at the net. We were unable to adjust to cover their tips.”

Khiana Hicks was also credited with a good hit and Destiny Raymond went 6-of-6 on serving.

AMMS racked up a total of nine serving aces in this match, with Hicks lacing five aces, Bella Davis two, and one each by Morales and Bella Douglas. Hicks and Davis each recorded 10 good serves, while Raymond was 9-for-9, leaving her perfect in 15 service attempts for the day.

Pupanek also chipped in with another three tips.

The Lady Jets also won a “B” game match, and Almond was pleased with the play of reserve sixth graders Emily Burch and Dionna Anderson.

“Emily made both of her serves over the net and Dionna had a good dig,” Almond pointed out. “I am so proud of Emily and Dionna for getting out there and showing how far they have come this season.  They have worked hard, and I could definitely see that on the court during this set.”