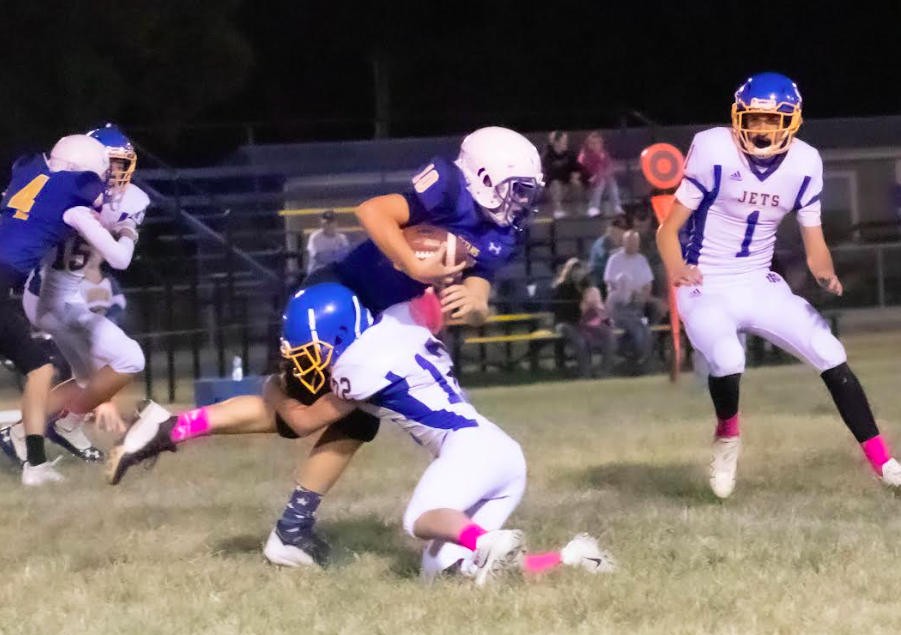 LEROY – Making the move to six-man football this season is proving to be a good
decision for Altoona-Midway High School.
The Jets traveled to Leroy Friday night and came home with their third victory of
the season, a resounding 51-6 victory over the Southern Coffey County Titans in 6-man,
District 1 play.
The fourth-quarter mercy-rule triumph gives Altoona-Midway a 3-4 overall mark on
the year. The Jets are 2-4 in 6M District 1 play.
Southern Coffey County, meanwhile, dropped to 1-5 in district and 1-6 overall.
“This was a great win for these boys and for the program,” said AMHS head coach
Randy Almond. “The boys played hard and their energy level and intensity was definitely
up. All in all, it was a very good win.”
In addition to the victory, the Jets attained another milestone when Blaine Collins
scored a touchdown and PAT and Lane Poeverlein ran in an extra point – meaning that
every player on the AMHS roster scored points this season.
“There are many ways to contribute to a football team, and all these guys have been
playing big roles for us the entire season, but face it – everyone loves to score,” Almond
noted. “So we had a goal that all 10 players on the roster score at some point during the
season, and we accomplished that goal.
“These boys have been a team all season long in the truest sense of the word,”
Almond added.
The game was actually close for the first half. Altoona-Midway led 7-0 at the
quarter and 19-6 at intermission. The Jets exploded for 19 points and a 38-6 lead entering
the fourth period, then finished off the game with two more scores in the final stanza.
“We were plagued with some very untimely penalties and need to clean up our
game,” Almond said. “We will continue to work on blocking and tackling as we prepare to
take on Burrton at home this Friday.”
Six different players scored touchdowns for AMHS against SCC. Harley Lopeman
and Jacob Meigs each found paydirt twice, while TDs were also scored by William
Stackhouse, Collins, Kieran Foster and Brandon Johnson.
Johnson racked up 126 yards in the air had two TD passes, while Meigs threw for
another 44 yards and Foster added five.
The Jets also pounded out 260 yards on the ground. Lopeman led the way with 93
yards, while Collins churned out 54 yards, and Meigs and Johnson added 37 and 35
respectively. Rounding out the rushing yardage were Chase Nalley with 17, Foster with
12, Kage Beck with seven and Poeverlein with five.

The leading receivers for AMHS were Meigs with 49, Stackhouse with 38, Johnson
27, Nalley 21, Foster 20, and Andy Tiger 17.
Stackhouse picked off a pair of Charger passes, and he and Meigs were in on 12
tackles apiece to lead the Jet defense. Johnson and Collins were credited with 10 tackles
each, and Lopeman added seven.
“I was proud of every member of this team,” Almond said. “It was a good win.”
The Jets return home this Friday, as they step out of district play to host Burrton
High School. Burrton comes into the game 4-3 overall and 3-3 in 6M District 2. However,
the Chargers are licking their wounds from a 72-0 shellacking suffered Friday night at the
hands of undefeated Cunningham.