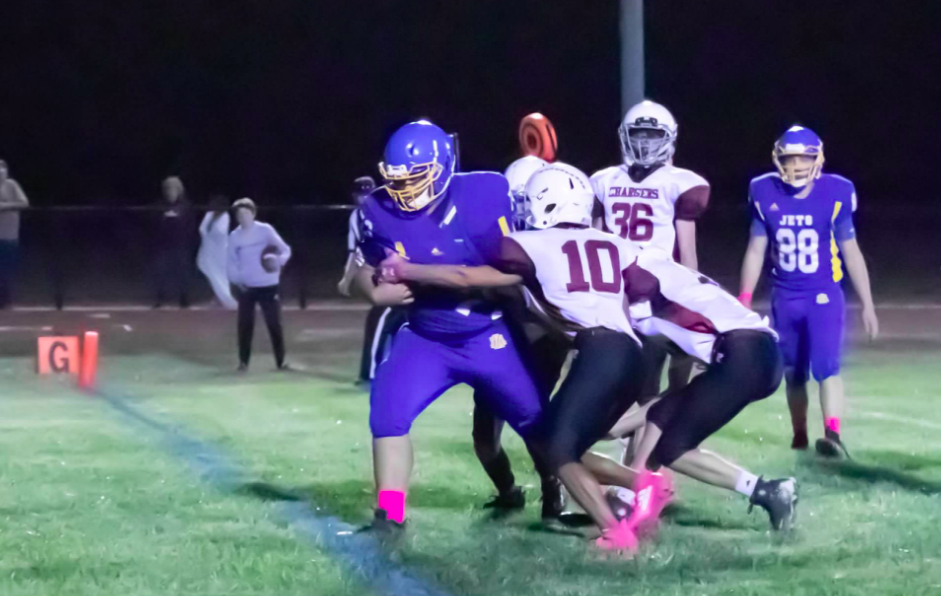 BUFFALO – Football teaches young men so many things besides the sport: Effort,
intensity, teamwork, perseverance, determination …
… and sometimes heartbreak.
The Altoona-Midway Jets found that out in excruciating fashion as they fell 41-40
to the Burrton Chargers, closing out the regular season in a non-district, six-man contest
held before a Senior-Parent Night crowd here Friday at Frank Kennedy Field.
Altoona-Midway led most of the contest and appeared on the way to its first
nonlosing regular season since 2002, when Burrton rallied for two fourth-quarter
touchdowns to pull out the dramatic one-point win.
“That was a tough pill to swallow,” said AMHS head coach Randy Almond. “There
are many lessons to be learned from sports, and some of them are painful. Tonight was one
of those lessons.
“In many ways, losing by one point is harder to take than getting blown out,”
Almond noted. “You think of all the plays that, had they gone just a little different, would
have changed the outcome.
“But I am very proud of the way these boys battled, and I have no doubt they will
bounce back, have a good week of practice, and be ready to go for the first round of the
playoffs.”
The Jets finished the regular season 3-5 and 2-4 in 6M-D1 play. AMHS will now
make the long trek to Rozel in western Kansas for the first-round of the first-ever Kansas
6-man playoffs. The Jets will square off against Pawnee Heights, the fourth-seed in 6M-
D2.
Altoona-Midway held the lead at the end of each of the first three quarters. The Jets
were ahead 14-7 after one, 27-21 at halftime, and 34-28 entering the final stanza.
The Chargers went up 35-34 midway in the fourth period, but the Jets responded to
retake the lead, 40-35. But with just 54 seconds remaining in the contest, Burrton scored
what proved to be the game-winner.
The Jets were frantically mounting a comeback in the final seconds, but a turnover
foiled their attempt at a miracle finish.
“Everyone remembers plays that happen late in a close contest, but all the plays
earlier make just as much of a difference,” Almond said. “Both teams scored six
touchdowns. Burrton made five extra-points and we only made four. That ended up being
the difference.”
It was Senior Night, and Altoona-Midway recognized their four seniors: Brandon
Johnson, Harley Lopeman, Chase Nalley, and Andy Tiger.

Nalley had an outstanding night for the Jets, rushing seven times for 75 yards and
three touchdowns, completing his only pass for 15 yards, and also hauling in two
receptions for 21 yards, as well as scoring an extra point.
Johnson carried seven times for 72 yards, and hit on 5-of-8 passes for 37 yards. He
also was on the receiving end of a 32-yard completion.
Lopeman finished the night with 35 yards rushing on four attempts, including a TD
and a PAT, while Tiger toted the ball four times for 11 yards, and scored two extra points.
Underclassmen also contributed to the offense, as William Stackhouse gained 30
yards rushing, 29 receiving, and also scored defensively on a Pick-6. Kieran Foster racked
up 25 yards and a touchdown rushing, had four yards receiving, and completed a pass for
21 yards.
Jacob Meigs passed for 32 yards and had 15 yards receiving, and Blaine Collins
rushed the ball once for five yards.
Stackhouse and Collins led the Jets defensively with seven tackles apiece. Collins
had three sacks and two fumble recoveries while Stackhouse added a sack to go along with
his interception return.
Meigs was in on five tackles and joined Collins in falling on a pair of Charger
fumbles. Meigs, Johnson and Lopeman were all also credited with sacks.
Playoff Notes
Altoona-Midway finished the season 3-5 overall and 2-4 in district play, making
them the fifth seed in 6M-D1. They will hit the road Friday to Rozel to square off against
Pawnee Heights, and 3-5 overall, but the fourth seed in 6M-D2 by virtue of its 3-3 district
log.
Fans hitting the road for Friday’s playoff game will have to leave early. Rozel is
northeast of Dodge City and over 230 miles from Buffalo.
AMHS and Pawnee Heights have two common opponents on the season. Peabody
defeated the Jets 45-19 and beat Pawnee Heights 53-6. In addition to nipping Altoona-
Midway by one point Friday, Burrton took the measure of the xxx 82-60 two weeks ago.
2022 is the first year for Six-Man playoffs to be sanction by the Kansas State High
School Activities Association.