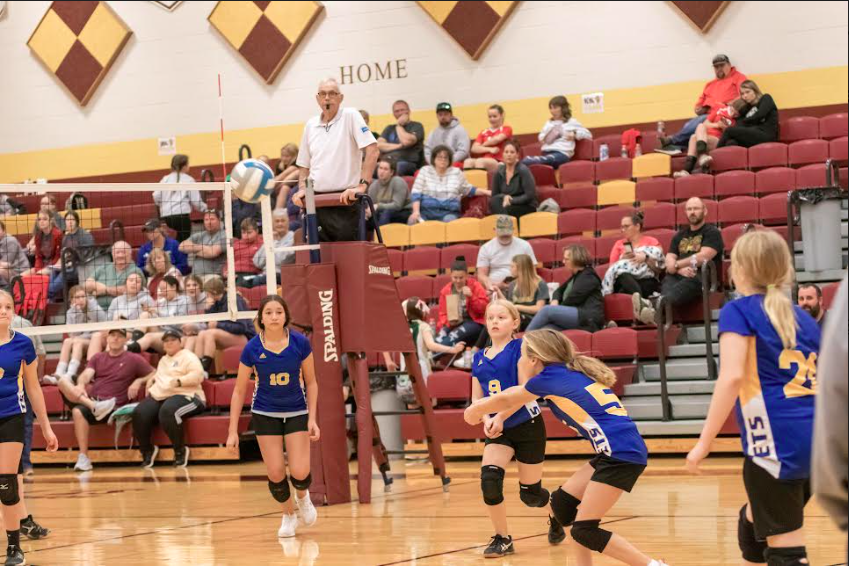 Our apologies for the delay in getting this out sooner.

ST. PAUL – What a way to wrap up a tremendous season for the Altoona-Midway
Middle School volleyball team.
The Lady Jets won both of their matches here Saturday, and thus captured the lower
bracket championship of the Mineral Belt League Tournament.
Altoona-Midway won their opening match over Elk Valley 25-12, 25-17. That
advanced the Lady Jets into the finals against St Patrick’s, and AMMS claimed a 25-19,
25-20 triumph to clinch the title.
The MBL Tournament is divided into three brackets in order to promote competitive
matches. The three bracket champions do not continue on to determine a single victor.
“Winning both matches and finishing off the year with a bracket title was simply
tremendous,” said AMMS head coach Nikki Almond. “The girls were excited, and I am
very proud of all of them.”
The MBL lower bracket championship capped off a tremendous year for the Lady
Jets. Playing without any eighth graders on the roster, the AMMS squad improved
continually throughout the season. The Lady Jets won eight of their final 10 contests to
finish the season with an impressive 9-9 record.
“I am so proud of their tenacity through the season and couldn’t have asked for a
better group of girls,” Almond said. “I am excited that I get this team for another year
before these 7th graders move on to high school.”
Members of the 2022 Lady Jets were: Sandra Morales, Hadlee Pupanek and Bella
Davis, seventh graders; and Khiana Hicks, Dionna Anderson, Bella Douglas, Emily Burch,
and Destiny Raymond, sixth graders.
Almond was assisted on the bench by Chary Weilert.
AMMS vs. Elk Valley
The Lady Jets took the measure of Elk Valley 25-12, 25-17 in the opening round.

Morales ripped off 23 good serves including 15 aces. Hicks contributed five aces,
Pupanek had three, and Raymond added one ace.
“This was the first time Khiana had ever served over hand in a match,” Almond
noted. “She did amazing and was so excited. The girls did amazing at lifting each other up
and taking care of the ball in this match.”
Pupanek also had a kill in the victory.
AMMS vs. St. Patrick’s
The tourney final with St. Pats was much tougher, but the Lady Jets came out on top
25-19, 25-20.
Morales fired another seven aces while Raymond and Hicks added two and one,
respectively. Pupanek had four tips, and she and Morales also claimed two kills apiece.
Morales was credited with five good hits and Hicks had two, while Morales and and
Raymond each added a dig.
“This was an emotional match,” Almond said. “The girls got a little nervous when
the score got close, but they pulled it together and managed to post the win.
“We were missing a starter today, so Emily (Burch) played in her place,” Almond
noted. “Emily had two good serves in this match and has improved a lot over the season,
along with the rest of the girls. I could not be prouder of this group.”