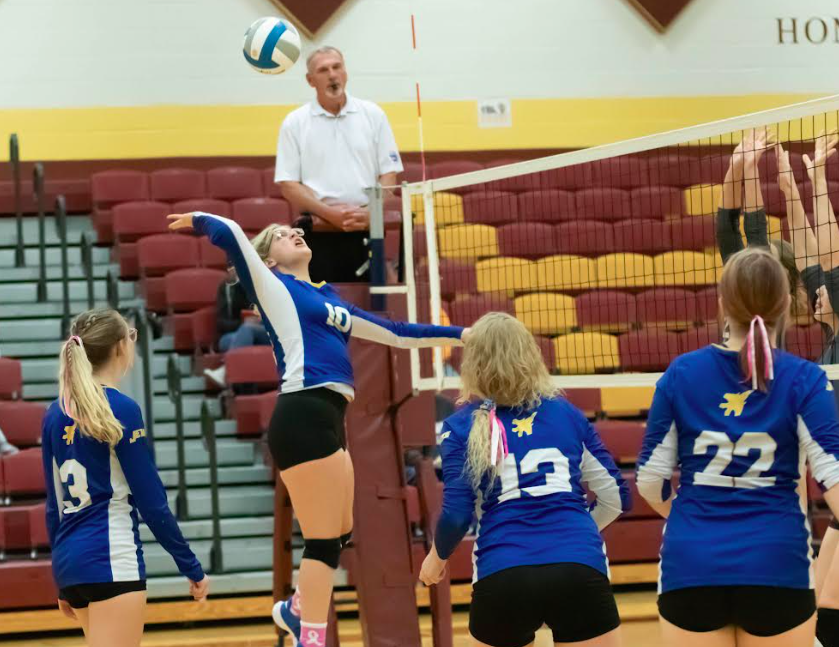 ST. PAUL – The Altoona-Midway High School volleyball team closed out its 2022
fall season here Saturday, falling to the Waverly Lady Bulldogs in the opening round of
the Class 1A-DII Sub-State Volleyball Tournament.
Waverly, seeded fourth in the sub-state, defeated the fifth-seeded Lady Jets in
straight sets, 25-11, 25-10.
“It just wasn’t our day We didn’t act like we were there to win,” said AMHS head
coach Amanda Odell. “The girls would do good things and then turn around and make a
mistake; but in the end, we were just outplayed.”
Kyra O’Connor and Summer Raymond each had four service points for the Lady
Jets, with O’Connor adding two kills and Raymond two assists.
Autumn Raymond finished with three service points and two assists, while
Emmalynn Pupanek, Abby Relph, and Chantal Morales each registered two service points.
Pupanek and Chloe Stewart recorded one kill apiece, and Jyl Davis added a service
point.
It was the final high school volleyball game for O’Connor, who was the lone senior
on this year’s Altoona-Midway squad, which finished the year with a 3-24 mark.
“I am so glad I got the opportunity to be their coach,” commented Odell, who
completed her first year at the helm of the Lady Jets. “They improved so much during the
season and that is what I will always remember. We had fun and made lots of memories.”
Waverly advanced to the sub-state semifinals, where they were defeated by top-
seeded Lebo High School, which went on to claim the sub-state championship, topping
Southern Coffey County 25-10, 25-14 in the finals.
Lebo, 38-1, will now advance to the Class 1A-DII State Volleyball Tournament,
scheduled Oct. 28-29 at White Auditorium in Emporia.

The Lady Jets also traveled to St. Paul back on Oct. 11, closing out regular-season
play with a triangular against Northeast-Arma and the host Lady Indians.
AMHS came up short in both matches, falling to Northeast 25-16, 25-21, and also to
St. Paul 25-6, 25-6.
“We played the best game we have played all season against Arma, but still came up
short,” Odell noted. “The girls had great communication, movement and all around great
teamwork.
“Then in the game against St. Paul, we did not play well at all,” she added. “No
communication, no teamwork and no movement. It was totally opposite of how we played
against Arma.”
Leading the Lady Jets against Northeast was Summer Raymond with nine serve
points and four assists; Autumn Raymond with five serve points and two assists; Kyra
O’Connor with three kills, two serve points and a block; and Abby Relph with three serve
points, three blocks and a kill.
Emmalynn Pupanek chipped in two serve points and one kill; Jyl Davis racked up
six serve points, and Chloe Stewart had one kill and one block.
Against St. Paul, Relph fired in serve points to go with one kill and one block; while
Summer Raymond and O’Connor each had two serve points, with Raymond adding an
assist.
Pupanek and Autumn Raymond recorded one serve point apiece, with Pupanek also
blasting two kills and Raymond adding two assists.