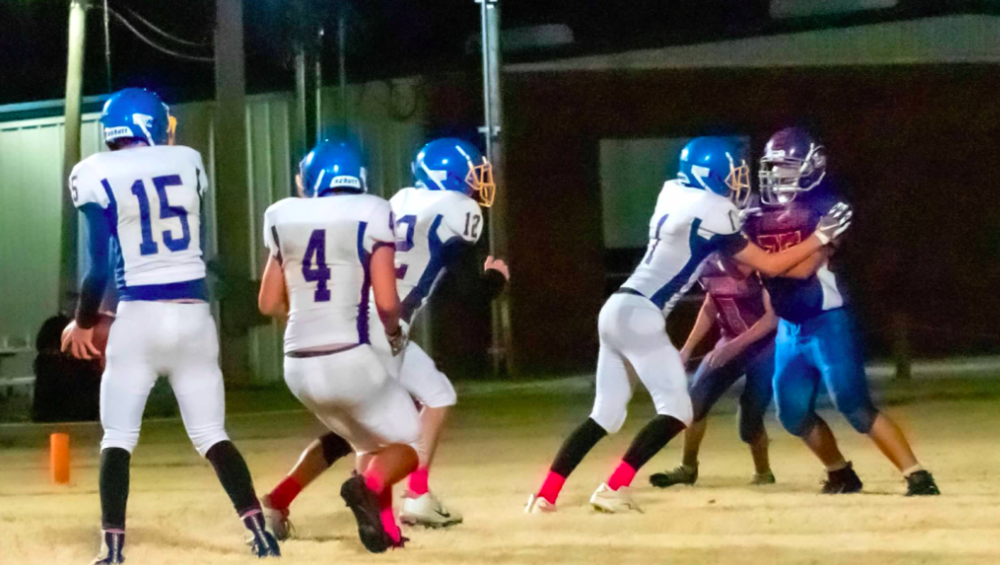 ROZEL – For the second straight game, the Altoona-Midway High School football team lost in heartbreaking fashion. But unfortunately for the Jets, this time it was the postseason, so there is no chance to “bounce back next week.”

In an exciting opening round contest in the 6-Man Kansas State Football Playoffs, the Tigers of Pawnee Heights hung on to nip Altoona-Midway 49-46 here Friday night, thus bringing the Jets season to a close.

Pawnee Heights, 4-5 on the year, advances to the regional round of the 6-Man playoffs. The Tigers will now square off against undefeated Waverly (8-0), which received a first-round bye.

AMHS, meanwhile, closes out its season 3-6 overall. But the Jets, who also lost 41-40 to Burrton in the regular-season finale, have no reason to hang their heads. These last two weeks found them a total of just four points shy of carrying a 5-4 record and a three-game winning streak into the regional round of the playoffs.

“It was definitely a tough way to end the season, losing our last two games by a total of four points,” said AMHS head coach Randy Almond, “especially since we were so close to advancing in the postseason.

“But all in all, I still feel that it was a successful season for the AMHS football program.”

Indeed, despite the close losses, the Jets posted three wins in a season for the first time since 2007, when Altoona-Midway finished 3-6 under head coach Vern Minor. They were also just short of posting the first postseason win for the school since a pair of playoff wins in 1992, when Eric Larson led the Jets to a 9-2 record.

Altoona-Midway definitely gave Pawnee Heights all they could handle, piling up nearly 600 yards of total offense and scoring seven touchdowns.

After the two squads finished the first quarter deadlocked at 13, the Jets managed a slim 26-25 lead at intermission. The Tigers used a strong third period to go up 37-33, and then each time tallied a pair of fourth-quarter touchdowns, leaving AMHS just three points short.

“It was a four-hour drive to get the game,” Almond said, “and after a tough loss like that, it seemed like the bus ride home was even longer.”

The Jets not only had a powerful offensive attack, but a balanced one as well. AMHS churned out 293 yards rushing and added 303 through the air.

Kieran Foster found the end zone four different times for the Jets and netted 51 yards on the ground, while Jacob Meigs and Harley Lopeman each eclipsed the century mark rushing, with Meigs gaining 102 yards and Lopeman 101. They each added one touchdown apiece while William Stackhouse added another.

Brandon Johnson racked up 217 yards passing, with Meigs throwing for another 86 yards. Stackhouse was the leading receiver with a whopping 179 yards, while Meigs added  65 while Andy Tiger collected 36.

On defense, Johnson led the Jets with 12 tackles while Meigs and Stackhouse each claimed 11 total, including seven unassisted apiece. Blaine Collins racked up eight tackles with Lopeman and Foster netting five each. Meigs had three sacks on the night, with Johnson and Collins each getting one.

“We were very aggressive on defense, which worked to our advantage for the most part,” Almond noted. “However, there were a few exceptions when we failed to break down or we took the wrong angle, and we paid for it.”

“All in all I was very proud of the boys this year. They played with a lot of energy and a lot of heart,” Almond said. “They were a fun group. I couldn’t have picked a better group of boys to coach.

“A 3-6 record may not seem like much, but we were very competitive in three other games, and with the improvement I have seen since the first of the season, I am very pleased.”

2022 is the first year for Six-Man playoffs to be sanction by the Kansas State High School Activities Association.