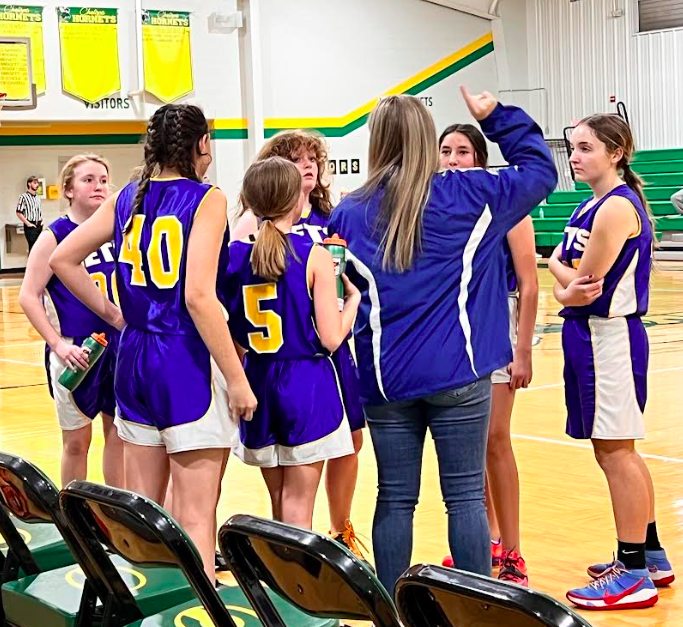 CHETOPA – If the Altoona-Midway Middle School basketball teams continue to show as much improvement as they did from their first games to their respective second games, big things are in store for both AMMS teams this year.

Just two days removed from a pair of tough season openers, the Altoona-Midway squads traveled to Chetopa Middle School and both teams showed dramatic progress, resulting in a split of their doubleheader here Thursday afternoon.

The Lady Jets claimed their first victory of the season, defeating the Lady Hornets 20-9, while the AMMS boys played a tremendous second half but came up a little short, falling 26-20.

Both Altoona-Midway teams will be back in action Monday, Dec. 5, when they host Altamont Middle School. First-game will begin at 5:00 at Milo Peterson Gymnasium.

Morales poured in a dozen points to pace the AMMS attack, while Raymond netted another eight points. The duo combined for all of the Lady Jets points.

“These girls came out to play,” exclaimed a delighted AMMS head coach Amanda Odell. “I am so proud of all of them. They all worked together, played as a team and played aggressively. We pushed the ball down the court, worked the ball on offense and came out on top.”

Marayah Dollison scored all nine points for the Lady Hornets.

Trailing 16-2 at intermission of the boys’ game, the Jets outscored Chetopa 18-10 in the second half, but still came up on the short end of a 26-20 final score.

“This was definitely a tale of two halves,” said AMMS head coach David Batzer. “We played hesitant, almost in slow motion, for most of the first half. But despite being down by 14 at the break, the boys never gave up and mounted a furious second half comeback.”

Carter went wild in the fourth quarter, scoring all eight of his points in the final stanza.

“When the team finally started feeding the ball to our bigs and being aggressive with the dribble drive, we really had them on the ropes in the fourth quarter,” Batzer noted. “We just ran out of clock.”

Harrison Carter of Chetopa tallied six of his game-high 12 points in the fourth quarter to keep the Jets from getting even closer. Ethan Lawson and Gabe Robison added seven and six points, respectively, for the Hornets, but combined for just one free throw after halftime.

“Our poor shooting woes continued,” Batzer said, “but the team showed heart and toughness, and that’s something we can build on for the rest of the season.”