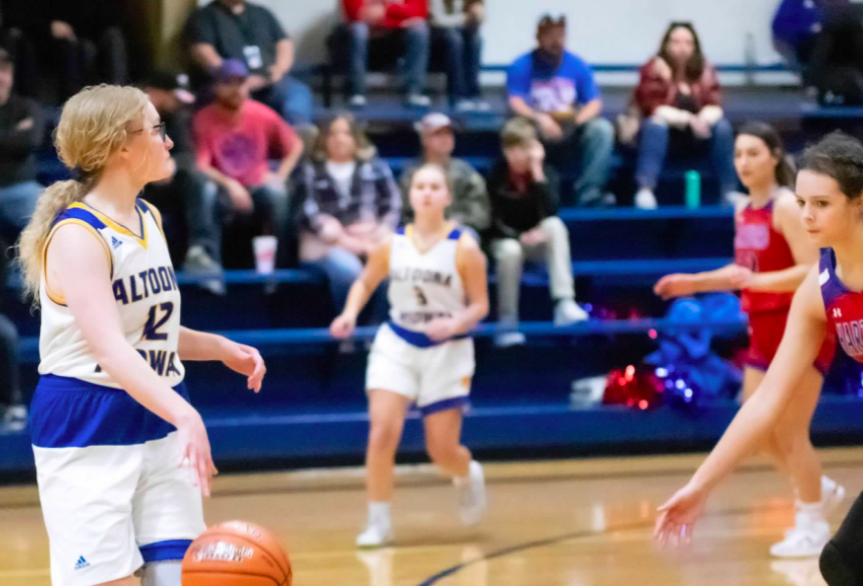 In the girls’ contest, Hartford rolled past a short-handed AMHS squad 56-6. In the nightcap, the Jaguars steamed past the Jets 67-35.

Both Altoona-Midway teams will regroup and prepare for three games each as they participate in the Marais des Cygnes Tournament this week.

Hartford outscored Altoona-Midway 23-6 in the second quarter to build a big lead at halftime and the Jets were unable to recover, falling 67-35.

The Jaguars led just 15-8 at the quarter, but the big second stanza saw the lead balloon to 38-14. The Jets played fairly even in the final two periods but could not put a dent in the deficit.

“We did a good job when we took our time and ran some offense, but we were often sped up by the Hartford defense,” said AMHS head coach Dave Vance, who was making his debut in charge of the Jets. “They played a three-quarter court trapping defense, and we insisted on trying to get past on the sideline instead of passing the ball to the middle.”

Hartford got a big game from senior Ali Smith, who consistently drove the lane with success, finishing with a game-high 24 points.

“We will need to work on performing better against pressure and hitting our open shots,” said Vance. “We had many opportunities, but we were a little hyped up and not focusing on the fundamentals.”

The Jets will have only one practice to prepare for the Marais Des Cygnes Tournament, with games slated Tuesday, Thursday and Friday.

The Altoona-Midway girls knew heading into the season opener that the odds were stacked against them. The Lady Jets squad, under first-year coach Jessica Porter, consists of just six players – two juniors, a sophomore, and three freshmen.

Lacking in both depth and experience, the result was predictable, as Hartford breezed to a 56-6 victory.

The Lady Jaguars led 22-5 after one period, and 42-5 at halftime. Two Lady Jets fouled out in the second half, leaving only four girls on the floor to finish the game.

“We had a very tough first half,” said Porter. “We got into foul trouble extremely early in the game. We finished the game with four girls, because two of my girls fouled out.”

A pair of sophomores had outstanding offensive performances for the Hartford. Keilee Finnerty poured in 19 points and Trinity Windle tossed in 17.

The Lady Jets got three points from Autumn Raymond, two points from Chantal Morales, and one point from Summer Raymond.

“I saw improvement in the second half of the game,” Porter added. “We are going to learn from this loss, and look towards the next game.” The Lady Jets will also compete in the Marais Des Cygnes Tournament.