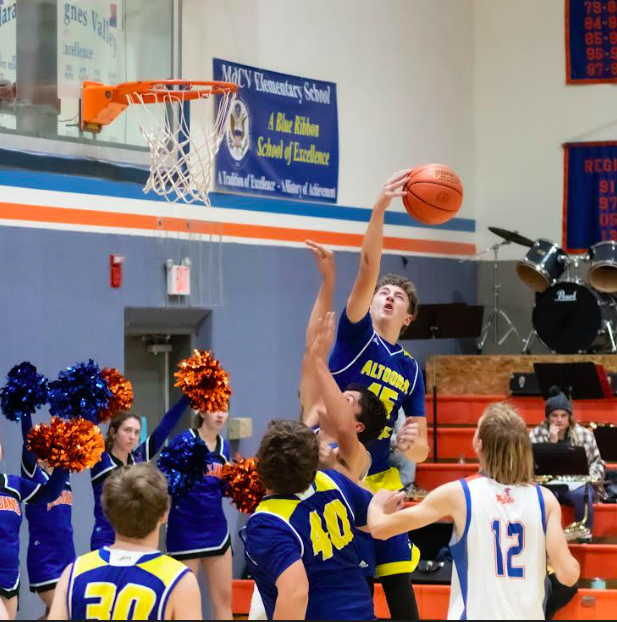 MELVERN – The Altoona-Midway High School boys posted their first win of the
young season in impressive fashion here Tuesday night, defeating host Marais des Cygnes
Valley 49-31 in opening round action of the Valley Tip-Off Classic.
Marais des Cygnes Valley was victorious in the girls’ contest, posting a 62-12
decision over the Lady Jets.
Both AMHS teams are slated to continue action in the tournament Thursday and
Friday. Thursday will be a twinbill against Southern Coffey County (again at Melvern),
while Friday will be matchups at Quenemo against Peabody-Burns High School.

Altoona-Midway produced a solid team effort at both ends of the court, pulling
away in the second half to post a 49-31 triumph over host Marais des Cygnes Valley. The
Jets are now 1-1 on the young season.
The Trojans held the lead early in the contest, but the Jets rallied to knot the score
24-24 at halftime. Defensive pressure and bench play (nine of 11 players scored for
AMHS, with non-starters accounting for 13 points on the night) turned the tied in the
second half as the Jets rolled to victory.
“Marais des Cygnes got off to a quick start and had us in the hole at the beginning,”
said AMHS head coach Dave Vance. “We were not hitting open shots early, and perhaps
taking a few ill-advised shots did not help.
“In the second quarter we did a better job of getting into an offensive flow, and
turning up the defensive pressure. By the half, we managed to tie the score.
“In the second half we applied a little more pressure on defense, took better shots,
and turned steals into layups,” Vance said. “The gentlemen all gave a great effort, and
everyone contributed.”
Jacob Meigs led the balanced Jet attack with 12 points, while William Stackhouse
fired in eight points, Kieran Foster notched seven, and Andy Tiger chipped in six. AMHS

also got four points each from Blaine Collins and Kage Beck, three from Chase Nalley,
and two apiece from Harley Lopeman and Brandon Johnson.
Stackhouse pulled down nine rebounds to lead the Jets, with Tiger hauling in four
rejects. Lopeman once again led in steals with five, followed closely by Stackhouse with
four.
“We had 12 turnovers, which is an improvement (from their opener), but we’re still
looking to get that number under 10,” Vance noted. “Free throw shooting is still an issue;
we really need to improve in this area to have a successful season. But overall it was a
great effort and we’re happy with the win.”
MdCV junior Corey Criss was a force inside for the Trojans, scoring on inside
drives and numerous put backs. However, no individual totals were available for the host
squad.

Despite doubling their offensive production from the season opener, the Lady Jets
were defeated 62-12 by the host MdCV girls.
“We did better tonight, but (MdCV) was taller than us and just beat us down low,”
said Lady Jets head coach Jessica Porter. “We did a good job on defense, and our help
defense was great. And, nobody fouled out.”
AMHS (0-2) benefitted from the fact Emmalynn Pupanek suited up and played,
giving them a roster of seven players.
“Emmalynn played tonight, so I did have seven girls,” Porter noted. “However,
Autumn (Raymond) has a hurt hip, and that happened early in the game. She played off
and on, but not to her full potential. Summer (Raymond) sprained her ankle in the first
half, and in the second half Ava Tindle wasn’t feeling well at all.
“Still, we played through everything, and stuck it out until the end. These girls have
a lot of heart, and don’t give up,” Porter added.
MdCV led 19-3 at the quarter and 45-5 at halftime. Gracen Stahl tossed in 15 points
for the Lady Trojans, while Akyra Traver and Olivia Lacey added 14 and 12, respectively.
Summer and Autumn Raymond each scored four points for the Lady Jets, while
freshmen Chantal Morales and Eryn Tiger chipped in two points apiece.