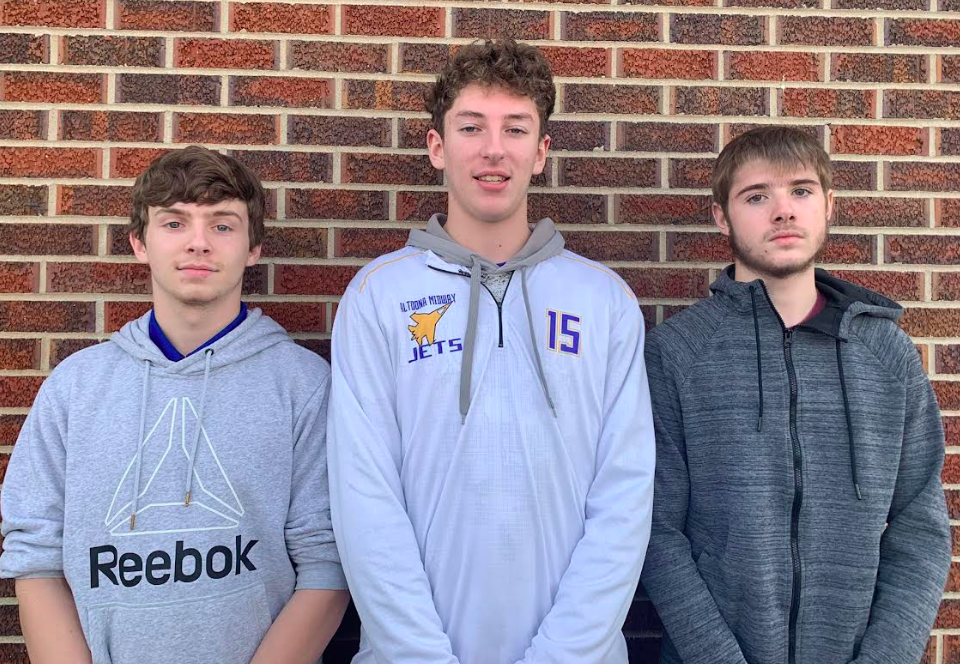 THREE JETS NAMED TO 6-MAN ALL-STATE SQUAD
BUFFALO – Three members of the Altoona-Midway High School football team
have been selected as part of the All-State Six-Man Football Team announced by Sports in
Kansas.
Representing the Jets on the all-state squad are seniors Brandon Johnson and Harley
Lopeman, and junior Jacob Meigs. All three from AMHS were tabbed as honorable
mention selections to the elite team.
Six-man football was recognized for the first time during the 2022 season as a
classification by the Kansas State High School Activities Association. However, this is the
fourth year for Sports in Kansas to recognize all-state honorees for six-man teams.
“I am so proud and so happy for Brandon, Harley and Jacob to receive this
recognition,” said Altoona-Midway head coach Randy Almond. “These three young men
played with a lot of heart and determination. They never gave up and they left it all on the
field every Friday night.”
Almond added, “All three are leaders on and off the field. Brandon and Harley are
seniors and will truly be missed and I count it a privilege to have been their coach. As for
Jacob (a junior), I am excited to see what he will be able to accomplish next year.”
Johnson, at defensive end, finished the season with 56 tackles, an average of 6.2 per
game. Lopeman finished with 14 touchdowns on the year, with four coming on kick
returns. He also had three rushing scores and seven TD receptions.
Meigs also accounted for 14 TDs from his quarterback position, passing for eight
scores and also rushing for six more. On defense, Meigs collected 62 tackles from his
linebacker spot, an average of 6.7 per game.
“Those numbers don’t tell the whole story,” Almond said. “It’s too bad they don’t
have a stat for leadership and heart.”

Altoona-Midway finished the 2022 football season with a 3-6 record, but lost their
final two games by a total of just four points. Despite the pair of heartbreaking losses, the
Jets posted three wins in a season for the first time since 2007, when Altoona-Midway
finished 3-6 under head coach Vern Minor. They were also just short of posting the first
postseason win for the school since a pair of playoff wins in 1992, when Eric Larson led
the Jets to a 9-2 record.
Almond said all three young men are destined for success off the field as well.
“I am confident with the work ethic, drive and determination that these three boys
have shown throughout the football season that there is nothing they can’t accomplish,”
Almond said.
Cunningham High School, state champions in the first-ever 6-man KSHSAA
playoff format, was highly represented on the all-state unit, with three players named to
the first-team offense and two players tabbed first-team all-state defense.
Voting for the elite squads was done by media members across the state of Kansas
and finalized by Chet Kuplen of Sports in Kansas and other members of the staff.

ALL-STATE HONORS – These three young men representing Altoona-Midway
High School were honorable mention choices as part of the 2022 All-State Six-Man
Football Team announced by Sports in Kansas. Jet gridders selected for the elite
squad were (left to right): Harley Lopeman, Jacob Meigs, and Brandon Johnson.
Lopeman and Johnson are seniors at AMHS and Meigs is a junior.