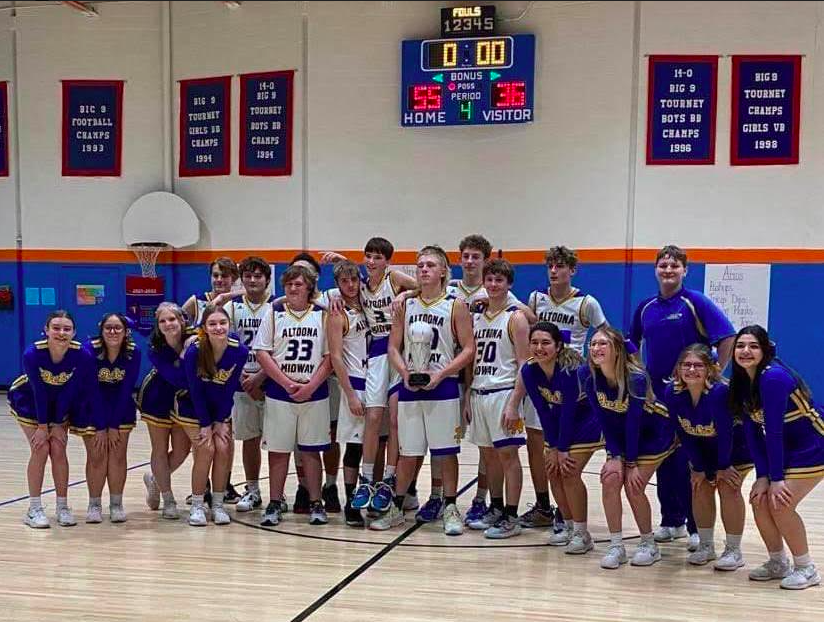 QUENEMO – What a great day to be a Jet!
The Altoona-Midway High School boys used a strong second half and rocked the
Peabody-Burns Warriors 55-36 here Friday night, and in the process claimed the
championship of the 2022 Marais des Cygnes Valley Tip-Off Classic.
Meanwhile, the Lady Jets made it a clean sweep of the day for AMHS, waltzing past
Peabody-Burns 48-11 to post their first victory of the young season.
Earlier in the week, the Altoona-Midway boys notched tournament victories over
Marais des Cygnes Valley and Southern Coffey County. The three-game winning streak
gives AMHS a 3-1 season record. The Lady Jets are now 1-3 on the year.
Both AMHS teams will host Flinthills High School in a doubleheader on Tuesday,
Dec. 13, to wind up the pre-Christmas portion of the schedule.

It was a total team effort – and a terrific second half – that brought the championship
trophy of the Valley Tip-Off Classic home to Altoona-Midway.
The Jets placed three players in double figures, saw two others tally eight points
apiece, and overall benefitted from great team defense and rebounding in posting the 55-36
victory over Peabody-Burns.
The triumph came without the direct services of first-year head coach Dave Vance,
who had to stay home due to illness. His spot on the bench was filled by AMHS activities
director Jeff Almond, who quickly diverted any praise back to the team and Coach Vance.
“Coach Vance had the kids ready to play. They made my job easy,” Almond said.
“The kids knew what they were supposed to do and they took care of business. This win is
attributed to Coach Vance's knowledge and understanding of the game and his ability to
communicate with his players.”
Peabody-Burns did not go down without a fight. The Warriors led 8-5 at the quarter
and trailed just 22-20 at intermission. The Jets forged a 38-29 advantage after three periods
and went on to post the 55-36 win.

“We came out of the gates a little slow but the kids came together and played three
really good quarters,” Almond said. “After the first quarter, we started hitting some shots
and played the way this team is capable of playing.
“We made a few adjustments at halftime, we were able to get Peabody out of their
game.  We took away their open looks and played better defense. They were really
frustrated and we took full advantage of opportunities that were given us.
“We also dominated the backboards in the second half,” Almond added. “Very
seldom did we give up multiple shots. At the other end, we crashed the offensive boards
and scored multiple easy buckets.”
Jacob Meigs was the game’s leading scorer, firing in 16 points, while Brandon
Johnson added 13 and Kieran Foster finished with 10 for the Jets. William Stackhouse and
Andy Tiger chipped in eight points apiece to the balanced AMHS attack.
Rebounding was also a team affair as Stackhouse and Meigs grabbed eight each,
Tiger notched seven boards and Johnson hauled in six.
“The stats may not show it, but I was also proud of the way Blaine Collins came in
and really gave the team a spark when we needed it,” Almond said. “Blaine is a great kid
who will do exactly what you ask him to do.”
Peabody-Burns was led by Tanner Parks, who totaled 15 points, and Christopher
Spencer, who scored 10.
AMHS also took care of the ball. The Jets finished with just eight turnovers, with
only two of those coming in the second half.
“It was a pretty fun atmosphere after the game,” Almond noted. “It been quite a dry
spell for AMHS and they were pretty excited to bring home the hardware.”
Members of the championship AMHS squad include: Kage Beck, Blaine Collins,
Kieran Foster, Brandon Johnson, Joey Lamendola, Harley Lopeman, Jacob Meigs, Blake
Nalley, Chase Nalley, William Stackhouse, and Andy Tiger.

While the boys’ game got all the headlines, the girls’ contest was an outstanding
example of the life lessons that sports – and sportsmanship – is supposed to provide.

Due to illness, Altoona-Midway had only four players available for duty. In order
not to forfeit, an AMHS cheerleader suited up and provided the needed fifth starter in
order to officially begin the game, stepping off the court following the tipoff.
In a tremendous show of sportsmanship, Peabody-Burns also had one of its starters
return to the bench after the tip – and proceeded to play the remainder of the game four-on-
four, despite finishing on the short end of the 48-11 score.
“This game was very different than anything I’ve ever seen before,” said AMHS
head coach Jessica Porter. “We were down to four girls due to illness, but the remaining
four didn’t want to forfeit, they still wanted to play. “Our AD, Mr. Almond, arranged it so
we could play 4-on-4. We had a cheerleader suit up, and step on the court for tip off,
because you must start with five players. As soon as the tip happened the cheerleader
stepped off.
“Well, Peabody had one of their players step off as well, and they continued that for
the entire game. What a class move,” Porter noted. “I made it very clear to the girls that if
we won this game we needed to stay very humble and remember that they absolutely did
not have to play us 4-on-4, but they did.”
As for the game itself, the Lady Jets raced to a 13-2 lead at the quarter and 28-4 at
halftime.
“We made some baskets pretty early and raced to a good lead and never looked
back,” Porter said. “We had lots of fast breaks and we finished our layups. In the fourth
quarter we made it a goal that everyone would score a basket, and we succeeded.”
Autumn Raymond and Emmalynn Pupanek led the Lady Jets offense, pouring in 19
and 17 points respectively. Chantal Morales also reached double figures, finishing with 10
points, while Eryn Tiger added two.
Pupanek led in rebounds with 12, while Raymond hauled down seven. Morales
grabbed six rebounds, to go along with six steals.
Alexsis Anderson finished with seven points for the Lady Warriors.
“We played well as a team, and I am very proud of these girls,” Porter said. “We
have faced a lot in the first four games, and they needed a win.”