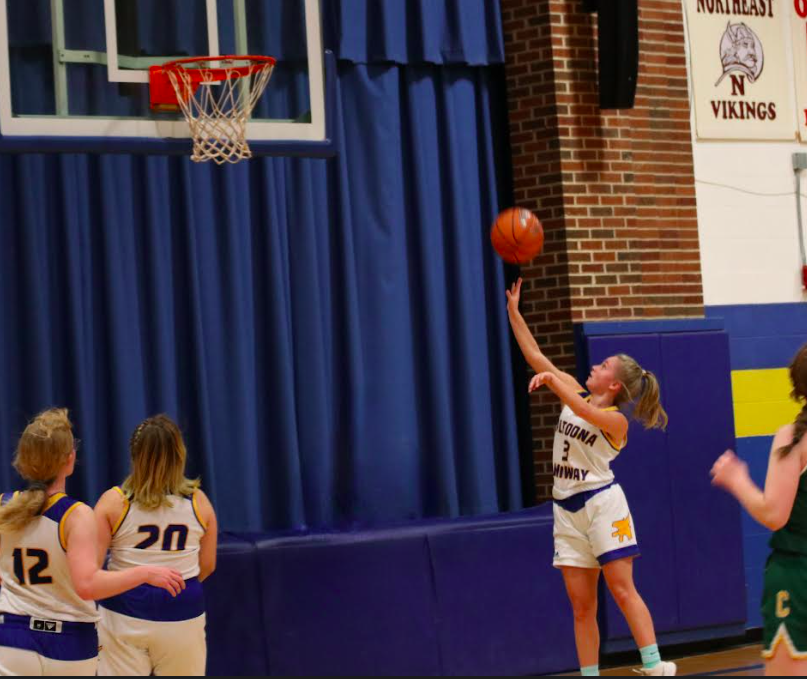 BUFFALO – Practicing over the holiday break with their eyes focused on returning
to action January 3 against Chetopa High School, the Altoona-Midway boys’ and girls’
basketball teams were hoping to receive a pair of victories as late Christmas presents.
On the court, both AMHS squads were denied that extra gift from Santa, but for
different reasons.

The Lady Jets put up a valiant effort against Chetopa, but came up short in dropping
a 36-32 decision Tuesday at Milo Peterson Gymnasium.
Meanwhile, there was no boys’ game played, as Chetopa was unable to field enough
healthy players to compete and had to forfeit.
The Jets (4-2) will instead open up the 2023 portion of their schedule Friday,
traveling to Colony for a matchup with the Crest Lancers. The girls’ contest is slated to
precede that event.

The 36-32 loss to Chetopa dropped the Lady Jets dropped to 1-5 overall on the
season, but not before AMHS put up an inspired effort.
“This one came down to the wire. We played a very good game, especially in the
second half,” said Altoona-Midway head coach Jessica Porter. “I continue to see
improvement, and I’m very proud of how the girls played tonight.”

The Lady Hornets went up 9-6 after one period and led 25-14 at intermission. But a
defensive adjustment – and a pair of inspired performances by Ava Hufford and
Emmalynn Pupanek – nearly turned the tide in favor of Altoona-Midway.
The Lady Jets outscored Chetopa 18-11 over the final two quarters, but it wasn’t
quite enough to pull off the comeback victory.

“We were down at half time, and I decided to switch our defense to a 1-3-1 zone
going into the third quarter,” Porter said. “Our defense and some fast breaks helped us get
back into the game, but we just ran out of time and couldn’t pull out the win.”

Hufford and Pupanek poured in 14 and 13 points, respectively, to pace the Lady Jet
attack. The duo tallied nine points each in the second half.
“Ava Hufford ended up fouling out in the fourth quarter, but she really had a great
game,” Porter said.

Pupanek also hauled down 16 rebounds while Hufford finished with five steals.
Summer Raymond also grabbed 10 rebounds and had three blocks.
AMHS also got a three-point basket from Eryn Tiger and a two-pointed by Ava
Tindle.  Shertz scored 11 points and Johnson had 10 for Chetopa.