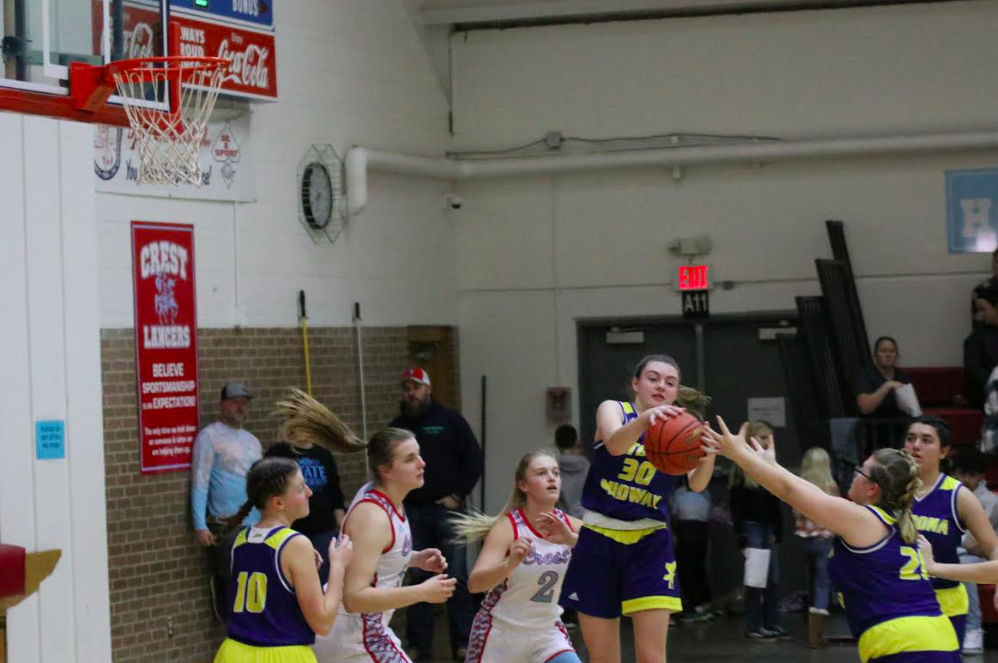 Jets come Up Short at Crest

COLONY – It was a rough night for the Altoona-Midway High School basketball teams as the Crest Lancers swept a varsity doubleheader in Three Rivers League action here Friday night.

Crest used a heavy three-point barrage to sink AMHS 72-36 in the boys’ contest, while the talented Lady Lancers registered a 72-12 triumph over Altoona-Midway in the girls’ game.

The AMHS squads will try to regroup and get back on track Tuesday when they stay on the road, traveling to Oswego for another TRL varsity doubleheader.

The Jets (4-3) were only down 8-10 points until late in the first half, when back-to-back three-pointers by Crest’s Jack White helped the Lancers build a 40-24 halftime cushion.

“Both teams played aggressive, full court pressing games in the first half,” said AMHS head coach Dave Vance. “It was fast-paced game but we were right in the game until those 3’s late in the half really gave Crest the upper hand.

“We came out in the third quarter but couldn’t gain any ground,” Vance noted. “Our turnovers started to mount and Crest widened its lead. Then, it began ‘raining 3’s’ early in the fourth quarter.”

William Stackhouse and Jacob Meigs led the Jets in scoring with nine points each, while Meigs also grabbed a team-high nine rebounds. Brandon Johnson led the Jets in assists with three, followed closely by Stackhouse, Meigs, and Harley Lopeman with two apiece.

“I’m confident our guys will be ready to bounce back Tuesday,” Vance said, “but Oswego will be another very tough game.”

No other game stats were available.

The Lady Jets (1-6) trailed only 15-5 at the end of the first quarter, but Crest quickly ballooned their advantage to 37-8 at intermission. It was more of the same in the second half as the Lady Lancers led 58-12 after three periods and then tacked on 14 more unanswered points in the final stanza.

“We were simply out-matched tonight. Most of their team was as tall and taller than (any of our girls),” mentioned AMHS head coach Jessica Porter. “They were long, fast, and worked well as a team getting the ball into the paint.”

Summer Raymond finished with four points for the Lady Jets while Eryn Tiger and Ava Hufford tallied three points apiece and Emmalynn Pupanek added two. Pupanek also pulled down a dozen rebounds and had two blocks in a losing cause.          Pupanek and Chantal Morales each collected three steals while Raymond and Hufford added two apiece.

“Some good things still happened,” Porter said. “Even though Crest was so much bigger, Emmalynn still managed to get 12 rebounds. Also, Eryn Tiger made a three. Eryn makes shots in practice, and then won’t hardly take any shots in a game. I think making this three was a big confidence booster and I’m so proud of her for that.”

Kayla Hermreck poured in 19 points to lead all scorers, while McKenna Hammond added 10 for the Lady Lancers, who had eight different players score five or more points.