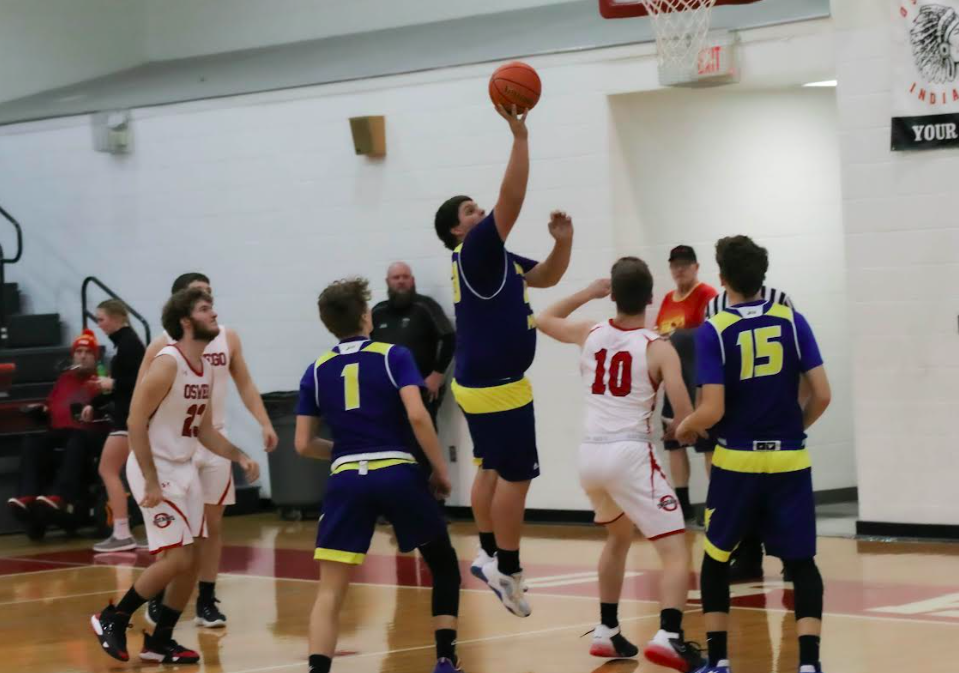 Altoona-Midway posted a 48-33 triumph in the boys’ contest. Earlier in the evening,
the Oswego girls recorded a 52-22 win over the Lady Jets.

The AMHS squads will not host Uniontown on Friday as originally scheduled.
Those games have been rescheduled for Feb. 2.
Altoona-Midway will host the Milburn G. Apt Memorial Tournament next week
(details at the end of the story).

The Jets (5-3) bounced back from a disappointing loss Friday against Crest by
posting an impressive 48-33 win on the road at Oswego.

Altoona-Midway raced to an 18-3 advantage after one quarter of play and were
never threatened against the Indians.

“The boys played their most efficient game to date in gaining a well-earned
victory on the road,” said AMHS head coach Dave Vance. “We played very good defense
the entire game, and especially in the first quarter when we built a big lead.”
Kieran Foster and Andy Tiger led the first quarter scoring attack for the Jets with
eight points and six points respectively. The score ballooned to 31-12 at halftime,
highlighted by William Stackhouse connecting on a near half-court shot just before
intermission.

Tiger and Foster also finished the game as the Jets’ leading scorers with 17 and 16,
respectively. Foster canned four three-pointers, all in the first half.
Rounding out the scoring for AMHS were Jacob Meigs with seven, Stackhouse and
Brandon Johnson with three each, and Blaine Collins with two.

Tiger also cleaned the board with 14 rebounds, while Stackhouse added a dozen,
including nine on the defensive end. Johnson had three assists.
“Improved ball handling (only seven turnovers) and shooting (48 percent from the
field, including 47 percent from behind the arc) were major contributions in the win,”
Vance said. “It was an all-out effort by the team in practices leading up to this game that
enabled them to be victorious.”

One area of concern for Vance – the Jets only got the free throw line four times, and
missed all of them.

“Zero, I say zero percent,” Vance said. “If we want continued success, we must
strive to do better.”

Oswego was led by Hutchinson, who tallied 13 points, including three treys, and
Goddard, who canned four three-pointers for his 12 points.

“Oswego started off pressing us, and we had a hard time handling that pressure in
the first quarter,” said AMHS head coach Jessica Porter. “After our nerves settled and we
focused on what had been taught, the girls found their groove and played much better the
rest of the way.”

The Lady Jets actually outscored Oswego 10-9 in the second period, but still trailed
26-10 at halftime. The Lady Indians led 40-17 after three periods and won 52-22.
“We had several good plays and looks at the basket, but at times the shots just didn’t
fall,” Porter noted. “The girls played hard, and never gave up.”

Rounding out the scoring for AMHS were Emmalynn Pupanek with five points, and
Ava Hufford with three. Pupanek also grabbed nine rebounds and had three steals, while
Raymond and Hufford recorded two steals each.

Apt Memorial Tournament
The next action for Altoona-Midway will be to serve as host for the Milburn G. Apt
Memorial Tournament next week. Other participants in the tourney include Chetopa,
Liberty Homeschool Alliance, and Tyro Christian School.

Tourney games will be played on Tuesday, Thursday and Friday, with boys’ and
girls’ teams from all four schools participating each day.