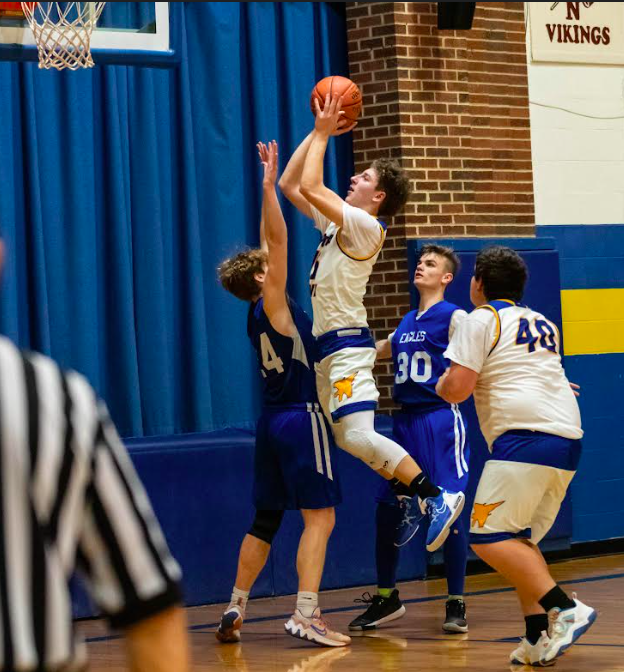 BUFFALO – Fans who enjoy close games have gotten their money’s worth – and
more – watching the Altoona-Midway High School boys during the first two nights of
action in the inaugural Milburn G. Apt Memorial Tournament.
But the Jets – and their supporters – just wish the final outcomes were a little
different.

The Lady Jets, winners in their opening round contest earlier in the week, also tasted
defeat Thursday against Tyro, falling 38-22.

In other action Thursday, Liberty Homeschool Alliance captured easy victories over
Chetopa in both boys’ and girls’ action.

The inaugural Apt Memorial Tournament is slated to wrap up play Friday. Tyro
Christian will take on LHA in the first two games, while Altoona-Midway will battle
Chetopa in a 6:30 girls’ game and a 7:45 p.m. boys’ contest.

A frantic rally by the Jets (5-5) erased a 12-point deficit in the final period, but Tyro
Christian hit their free throws down the stretch and escaped with a thrilling 62-60 win
when the Jets’ last-gasp three-pointer failed to find the mark.

Coupled with a one-point setback against Liberty in the opening round, AMHS has
now lost their first two games of the tournament by a combined total of three points.
“The game was on the line and it was won from the line by Tyro,” said AMHS head
coach Dave Vance, noting that the Eagles were 17-of-26 from the charity stripe while the
Jets were 0-for-9.

“We fouled 19 times and Tyro shot 26 free throws, making 17, while we made
zero,” Vance noted. “A 17-point disparity in free throws made. Even had we hit all of our
free throws, there would still be deficit of eight from the free throw line.”

Leading 45-40 after three quarters, back-to-back treys by Jordy Curtis and Luke
Pyle pushed the Tyro advantage to 54-42 midway in the fourth period. But a frenzied rally
saw the Jets rattle off 11 unanswered points to pull within 54-53 and set up the exciting
finish.

Altoona-Midway outscored the Eagles 20-17 in the wild fourth quarter, but Tyro
connected on 9-of-13 free throws in the final stanza while the Jets were 0-for-5.
“We finally switched to a zone press and we were able to convert some steals into
easy baskets in the final period,” Vance said. “We likely should have employed that
strategy earlier in the game, because our three-point shots were not falling.”

Stackhouse and Tiger each pulled down a dozen rebounds for the Jets, while Meigs
added five steals and three blocks.

Tyro’s freshman long-range bomber Jordy Curtis fired in 24 points to lead all
scorers, while Joshua Eaton finished with 16. The Eagles connected on eight three-point
attempts during the contest, with Curtis accounting for half of those.
“The boys played with great energy and effort; they played very entertaining
basketball in both losses this week,” Vance added. “We just need to make a few more
plays to end up on the right end of the scoreboard.”

The Lady Jets (2-8) were fresh off an impressive 37-28 win over the Liberty Arrows
earlier in the week, but couldn’t keep that momentum going against Tyro, as the Lady
Eagles came away with a 38-22 victory.

“We actually did a fantastic job against a fast tempo team,” noted AMHS head
coach Jessica Porter. “We knew going into the game that they were going to push the ball
and knock down shots. I think we did a pretty good job of stopping the ball, and we hung
in there pretty well.”

Tyro led just 6-5 after one period, but a 12-2 second quarter pushed that advantage
to 18-7 at intermission. The second half saw Altoona-Midway make a couple of runs to
stay within striking distance, but never enough to seriously threaten the Lady Eagle lead.
“The first part of the game we took a couple rushed shots, but after we calmed down
we started taking the right shots,” Porter said. “The big difference between Tyro and us
was their shots fell, and ours didn’t. Despite the loss, I’m very happy with how we played
tonight.”

Emmalynn Pupanek played a tremendous game for AMHS, finishing with 15 points,
an eye-popping 17 rebounds, and three steals. The Lady Jets also got three points from
Ava Hufford and two each from Chantal Morales and Eryn Tiger.