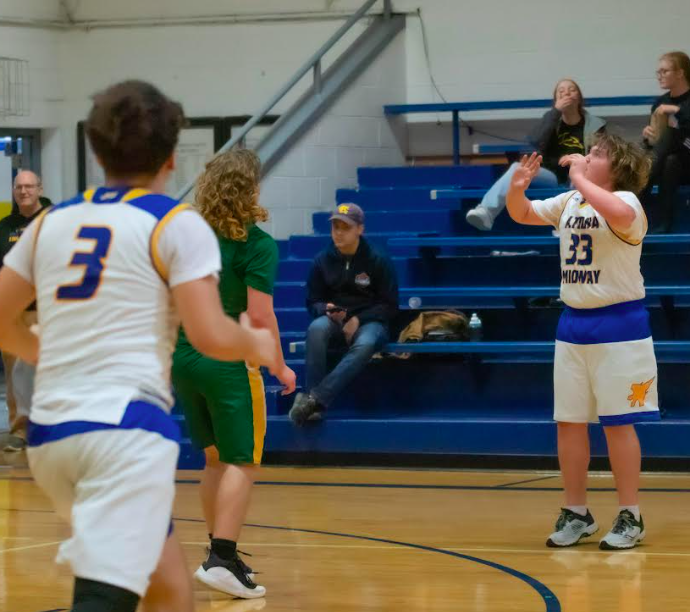 BUFFALO – For the host teams, it was the perfect ending for the inaugural Milburn
G. Apt Memorial Tournament, as both Altoona-Midway High School basketball teams
posted lopsided victories over their Chetopa counterparts Friday night at Milo Peterson
Gymnasium.

Altoona-Midway took the measure of Chetopa 47-11 in the girls’ game, and the
boys’ finale saw the Jets fly past the Hornets 71-24.
In other tourney action Friday, Liberty Homeschool Alliance captured the
championship of the boys’ bracket with a victory over Tyro Christian School. Meanwhile,
the Tyro girls claimed the title on that side of the bracket, defeating LHA.
Both Jet squads will return to action Tuesday, Jan. 24, hosting Southeast High
School. Games will begin at 5 p.m.

After back-to-back heartbreaking losses in the first two rounds of the tournament by
one and two points, respectively, Altoona-Midway righted the ship and got a much-needed
victory in its 71-24 cakewalk over Chetopa.

Jets (6-5) raced to a 26-4 advantage during the opening eight minutes of play, and
their lead ballooned to 42-9 at halftime. AMHS, which substituted liberally and had all
nine players score on offense, led 62-19 after three periods.

“Every player was involved in this victory, and it was a very good game following
two tough losses in the tournament,” said Altoona-Midway head coach Dave Vance.
“Every player that suited up not only got into the scoring column but also into rebounding
column. “It was nice to finally return to the win column and actually made a few free
throws in doing so.”

Chetopa only suited six players for the contest. Blake Carter was a virtual one-man
offensive show, scoring 19 of the Hornets’ 24 points on the night.

The Lady Jets (3-8) were all smiles during and after their convincing 47-11 win over
Chetopa.

The AMHS girls not only won for the second time in a week and earned the runner-
up spot in the tournament (falling only to eventual champion Tyro), but they also avenged
a 36-32 loss to Chetopa suffered a little over two weeks ago.

Altoona-Midway quickly prevented any chance of a repeat result, storming to a 12-2
lead after just one period and a whopping 32-5 margin at intermission. Six girls suited up
for the Lady Jets and all six found their way into the scoring column.

“I have nothing but praise for how our team played tonight,” said a happy AMHS
head coach Jessica Porter. “We were aggressive, caused turnovers and fast breaks, took
good shots and made them. They all played well as a team and everyone scored.”
Emmalynn Pupanek again led AMHS in scoring with 17 points, while freshman
Chantal Morales fired in 14 points. Summer Raymond contributed eight points, Ava
Hufford netted four points, and Ava Tindle and Eryn Tiger added two points apiece.
Korisa Conyers had five points and Izabella Nash four for Chetopa.

“Chetopa was missing probably their best two players, so they really struggled only
having five girls,” Porter said. “In the second half one of their players fouled out, so I had
one of my five stand off to the side, and we played them four-on-four the rest of
the game.”

Morales and Pupanek were each credited with six steals and also pulled down nine
and eight rebounds, respectively, while Tindle grabbed six caroms and Tiger had five.
Hufford, Raymond and Tiger each dished out three assists.