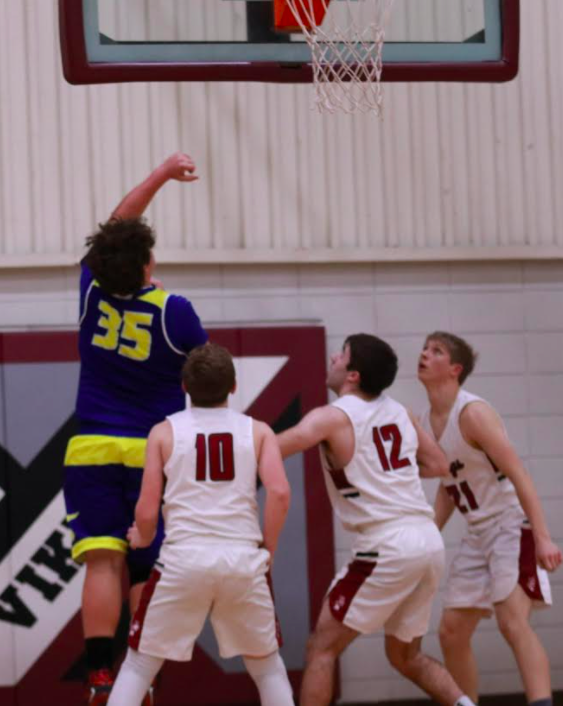 AMHS fell in both contests. Northeast squeezed out a 38-37 victory in the boys’ matchup played at Arma, while back at home the Lady Jets played a tremendous first half before succumbing to St. Paul by a 49-18 count.

Both teams will now prepare to participate in Class 1A, Division II sub-state action later this week. On Thursday, Feb. 25, the Altoona-Midway girls will travel to Waverly for a 7 p.m. tipoff. On Friday, Feb. 26, the AMHS boys will host a first-round sub-state game against Marmaton Valley. That game will also begin at 7 p.m.

ARMA – Cold-shooting hampered the Altoona-Midway boys (5-11, 3-5 in the TRL) as they lost a fourth-quarter lead and were edged 38-37 by the Northeast High School Vikings.

“We played a patient offensive game in the first half,” said AMHS coach Lane Huffman. “We did a nice job of attacking the zone and putting ourselves in position to score. But then we would fail to score even after giving ourselves easy layups.

“We finished 39 percent from the field, 16 percent from three (point range), and 50 percent from the free throw line,” Huffman added. “It’s really tough to win with the low percentages we put up.          Despite the frigid shooting, the Jets led 16-10 at the quarter, 22-14 at halftime, and 33-30 entering the final period, when Northeast rallied to squeeze out the win.

“The thing that really hurt us was turning the ball over 27 times,” Huffman noted. “Every time we’d get a stop on defense, we’d give the ball right back to Northeast. Many were unforced travels, double dribbles, and trying to make passes in the air.

“I felt that the energy was off. We didn’t execute the simple basketball plays tonight,” Huffman said. “But we have a chance to make a long run through out sub-state. This team hates to lose, and I really believe we’re going to have a good week of practice and get back to the winning column.”

BUFFALO – The Lady Jets played a spirited first half and actually held the lead after one period before trailing St. Paul just 21-16 at intermission. But then the wheels fell off.

“Our Lady Jets came out hyped and ready to play tonight,” said AMHS girls’ coach Randy Almond. “Our defense shut down the sixth-ranked team in the first half and held them to 21-16. We even held the lead at the end of the first quarter.”

Indeed, the inspired Lady Jets were up 8-6 at the quarter, and only down five at the break. But St. Paul regrouped and went on a 25-2 tear in the third period to surge ahead 46-18. The Lady Indians then scored the only three points of the fourth quarter for the final margin.

“We played a good first half, very fast paced and high energy,” Almond said. “However, it seemed as though we just ran out of gas in the second half and that's when turnovers, again, took its toll. We are a young team and made a lot of mistakes.

“We have been working on being strong with the ball and we did that the first half of the game. Unfortunately, we didn't start the second half with the same strength, intensity and energy.

“But I am still very proud of the way the Lady Jets battled tonight against a very tough St. Paul squad,” he added.