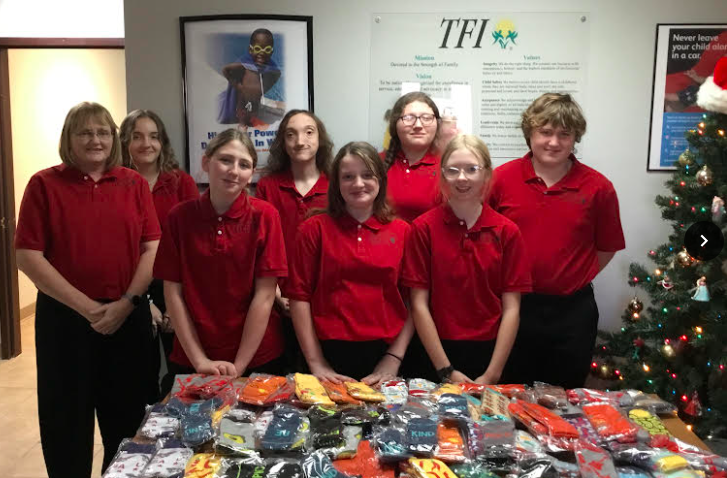 BUFFALO – The Altoona-Midway MS/HS FCCLA recently partnered with
WeHelpTwo to fundraise for their chapter to attend the National Leadership Conference
this coming summer – and help the local community at the same time.
Members of FCCLA (Family, Career, and Community Leaders of America) sold
funky/funny socks at several locations and events as a dual fundraiser. The proceeds not
only raised funds for members to attend the National Leadership Conference next summer,
but for every two pairs of funky/funny socks sold, the Altoona-Midway group announced
one pair of the socks would be donated to a charitable organization.

FCCLA members sold these funky/funny socks at home athletic events, Artist Alley
in Chanute, at the Buffalo Homecoming, and at the Burlington Craft and Gift Annex.
The chapter sold enough socks to be able to donate a total of 392 pairs of socks,
which was definitely the highlight of the event for the group’s members, according to Mrs.
Cathy Caylor, FCCLA adviser and Family and Consumer Sciences teacher at Altoona-
Midway.

“I am very proud of these members and how excited they were,” Caylor said. “They
didn't count the money they were making – they were counting the number of socks that
they were going to donate. It was very heart-warming.
On Dec. 14, FCCLA members delivered their first donation of 215 pairs of socks to
TFI Kansas Foster Care in Chanute. The socks will be given to every foster child in
Wilson, Woodson, Allen, and Neosho County.

Caylor noted that FCCLA members still have socks for sale, if anyone is interested
and would like to assist the chapter in its efforts.

FCCLA (formerly known as Future Homemakers of America) is a nonprofit
national career and technical student organization for young men and women in Family
and Consumer Sciences education in public and private school through grades 6–12.